Cultivating the art of patience while gardening in a small space

This time last year, my thoughts turned to the removal of a raised bed to make room for a self-designed greenhouse, though it was almost four months before the raised bed and its contents were finally gone, and too late in the year to start building.

Now I can resurrect the greenhouse plans I’d put on hold – slightly updated to take account of the space available, but pretty much the same size.  I originally thought of having three separate greenhouses, each 70 x 70 centimetres (the width of a sheet of twin-wall poly-carbonate and slightly over the width of the previous raised bed, which will hide the old wall foundations).

With the two compost bins already in place (and too full to move) there is still plenty of room to play with – wriggle-room if you will – which currently leaves a 400 – 600  mm gap (16 inches) between one end of the greenhouse and the first compost bin.

I have simplified the structure into one, with a single door in the middle.

The side cross-bars will act as shelf supports. The greenhouse backs onto and will be fixed to the brick wall of my husband’s shed, so the wooden uprights don’t need to be more than 4″ x 4″ – but it depends what we have in the shed. I refuse to pay out for wood when the shed is full of posts and beams of differing lengths and thickness.

I don’t have a scanner at the moment so had to photograph these sketches – which is why the image below looks out of shape. 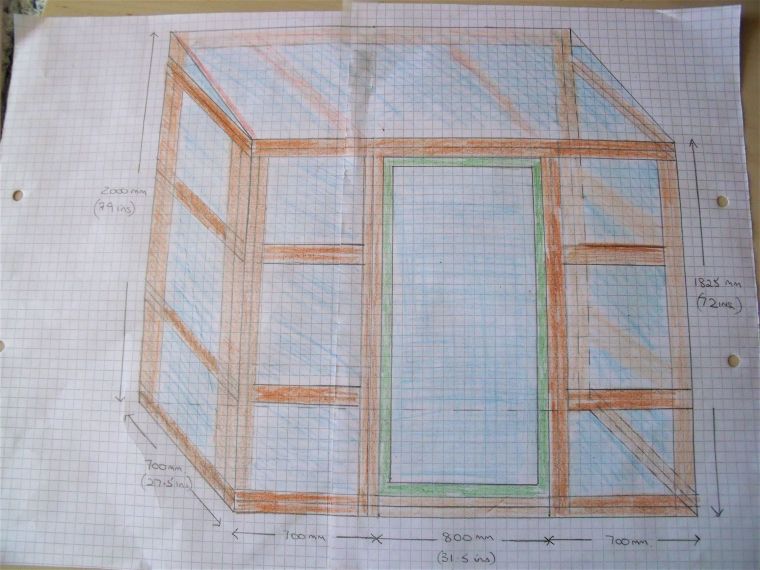 But it’s easier to visualise when there is a (almost) scale model – and I had a spare hour or two, and plenty of craft cardboard so . . . 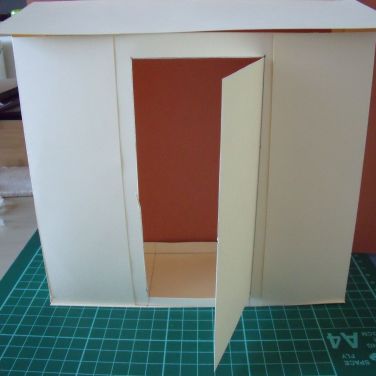 Now we’ve just got to build it!

It may not be very large, but it will give me plenty of room for seedlings and cuttings in the spring, and (with shelving removed) somewhere to grow tomatoes or peppers perhaps. It won’t get a lot of sun in the summer (shaded by my neighbour’s trees – still), but it will be warm, especially with the brick wall retaining heat.

And it will be a step up from this mini-greenhouse in my shed.

A Sunday walk had me peering into neighbours’ gardens to see what, if anything, was growing. I believe the above may be a variegated euonymus, though I don’t know if the pink tinge is its autumn coat or permanent. END_OF_DOCUMENT_TOKEN_TO_BE_REPLACED

Good morning from a blustery North Wales. We are currently experiencing alternating sunshine and horizontal drizzle, so I’m staying put.

This white cyclamen has now come into its own. I’m hoping to be able to split these plants in the spring, ready for planting out next autumn.

I’ve tidied up the Shady Border by nipping off the ends of the clematis Montana back to a bud, and removing the dead stems and leaves from the Japanese anemones.

A general tidy of the shady patio and I decided to use the olive tree we dug out of the raised bed as a makeshift bird feeder. I’ve placed it opposite the kitchen window, giving me a good (and warm) view ready for the RSPB’s Big Garden Birdwatch (25-27 January) – you don’t have to join RSPB to request a free pack. I’ve already had blue- and great-tits at the feeder and have moved the homemade suet block nearer the centre since I took this photo. This is to help ‘my’ robin, who can now reach it to feed.

I planted up these pots with rescued narcissi from the Very Shady Border (now Compost Corner), so it’s nice to see they’re staging a comeback. I must remember to label the pots this year as I want to plant these out in the Shady Front border along with the cyclamen and 2019’s hellebores.

Hopefully these Brussels Sprouts will continue to grow and not get eaten by anything. I am considering moving them into a larger pot with some fresh compost as they must have used up every nutrient in the current pot by now.

And finally, a couple of my leeks will soon be read for harvesting. I started these of from seed around eight months ago, so it’s been a long process, but at least we won’t have a glut and can take our time and savour each one.

Take a look at The Propagator’s blog for more magnificent gardens and lots of hints, tips and advice on anything and everything garden related.

Already, things in the garden are showing a promise of things to come. The first bud on one of my clematis montana appeared before the end of the old year. END_OF_DOCUMENT_TOKEN_TO_BE_REPLACED

A look back over the year to see what worked – and what didn’t – for me. Was it me? Was it the weather? Or a combination of both?

I grew the same variety – from the same packet – as in 2018.  I direct-sowed them in the same space below the arch in Raised Bed A, after replenishing the compost.  The first sowing was indoors on 24 February.  Not a single bean germinated.  The second sowing was made directly into the soil.  I planted 18 beans, 2 came up but didn’t grow beyond a couple of inches.  In the end I pulled them out, dug over that patch (no other beans in sight) and replanted using a different variety, Blauhilde, which is a dark purple bean (cooks as dark green).  These are not generally available in garden centres; mine came free with a magazine. END_OF_DOCUMENT_TOKEN_TO_BE_REPLACED

Living in a hilly rural area as we do, we are lucky that we have a lot of ancient hedges separating the fields. In the last couple of week, they have had their winter haircut, which means our view has been extended somewhat.

The only downside is the spikes of cut wood that litter the roads and threaten to puncture our car tyres. But we know that, come Spring, nesting birds will not be disturbed. END_OF_DOCUMENT_TOKEN_TO_BE_REPLACED